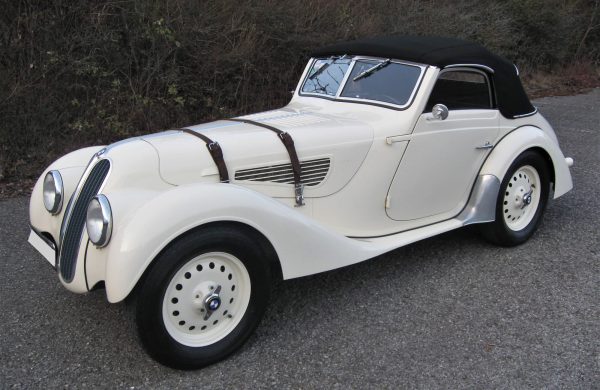 Model history:
The BMW 328 is considered to be one of the best sports cars of its time and is still convincing today with its modern driving characteristics and performance data. The car, which was produced in 464 units, was extremely successful in motorsport before and after the war.
In addition to the works roadster, racing models with aerodynamic lightweight bodies as well as special models with weatherproof and “everyday-friendly” convertible bodies were produced by well-known body construction companies based on the lightweight tubular frame.
Alongside the BMW 507 and the BMW M1, the BMW 328 is one of the most sought-after BMW models and one of the most remarkable car models of all time.

Vehicle history:
This vehicle was delivered on August 11th, 1938 as a sports chassis with the chassis number 85 XXX to the company Philipp Müller, Düsseldorf and from there to the company Autenrieth, Darmstadt, to be provided with a special convertible body, which was only built 6 times.
This type of special body was common before the war. Autenrieth obtained the fenders, bonnet, dashboard and other parts from BMW, which were originally installed.
From the cowl onwards, the body differs significantly from the production version. The wooden frame was modified and reinforced to support the enlarged doors with cranked windows and the convertible roof. The rear has an externally accessible trunk. This means that this 328 version is significantly more comfortable than the Roadster, but without losing any of its sportiness.
The Autenrieth commission number is 6655, the body number. 47.
On April 22, 1939, the finished vehicle was delivered to the FP Mostert company in Meerbusch. Due to the chaos of the war, the vehicle was requisitioned by the French general staff and in 1945 came into the hands of a colonel in the French air force. His son took over the vehicle in 1982 and registered it in Paris.
It was later sold to a Düsseldorf vintage garage in Germany. In 1993 a collector from Hamburg took over the car and sold it in 2011 to the current owner, who commissioned the company Feierabend Würzburg to carry out the complete restoration.
As part of the extensively documented extensive restoration, the engine was optimized and reinforced in terms of power and torque.
The brake system on the front axle was converted to an authentic duplex Mille Miglia brake system.
The body and technology have been restored to the highest standard.

Conclusion:
The vehicle offered here is a very rare special version with a good history and few changes of ownership. The driving performance of the fast convertible should be emphasized as very sporty and fast.

Price on request:
Sale takes place in accordance with § 25 UStG (no VAT ID possible) on behalf of the customer.
(All information is subject to errors and mistakes).

Previous
Next
in Uncategorized Posted by Andre Henneberger