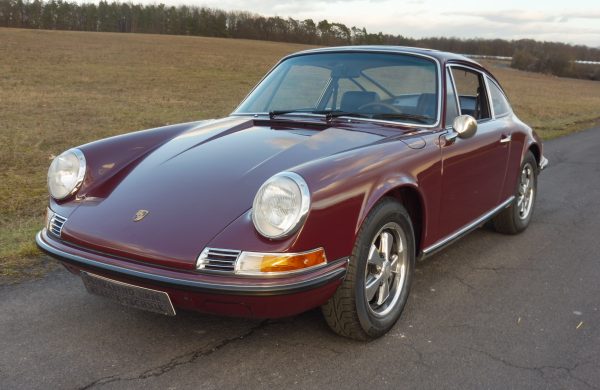 Model History
Introduced at the 1963 IAA, the first 911 version to go into production in September 1964 was the so-called Urmodell (original model) with a 130 hp, 2-litre, six-cylinder boxer engine. Meanwhile, the previous four-cylinder remained in production, and these vehicles were sold as Porsche 912. Unlike the Porsche 356, which was based on the VW Beetle in terms of body and chassis, the 911 and 912 had a self-supporting body and wheel suspensions with triangular wishbones and damper struts at the front and angular control arms at the rear, as well as rack-and-pinion steering.
In the summer of 1966 (the model year 1967), the more powerful 911 S with the same displacement was introduced. The higher-compression engine of this sportier version produced 118 kW (160 hp) and it was more extensively equipped than the previous model. Simultaneously, the Targa was added in addition to the Coupé.
The basic 911 model with the 130 hp engine was given the designation 911 L (Luxury) in the 1968 model year; at the same time, the 911 T (Touring) with a 110 hp six-cylinder boxer engine and four-speed transmission (otherwise five-speed) was offered as a relatively inexpensive model. From 1969, the 911 L with its carburettor engine was replaced by the 911 E with 140 hp (103 kW) output and mechanical intake manifold injection, which Porsche also used from then on in the 170 hp (125 kW) 911 S. By increasing the engine capacity, the engine power of the individual models continued to improve in the following years. Besides their engine power, the T, E and S models also differed in terms of interior and accessories.
(SOURCE: WIKIPEDIA)

In addition to the improved interior, the S model was the first 911 to receive the “Fuchs” rims with their signature 5-spoke design.
The built number of the 2-litre version was 1,492 ( according to the supplier).

Vehicle History
This vehicle is an original 911 S from 1969.
Originally built for the US market, this car was re-imported as a restoration object by a Porsche collector in the early 1990s and then extensively restored under the collector’s direction.
The bodywork, which was carried out in a renowned German workshop specialising in Porsche 356 and 911, is documented photographically. Documentation of the carried-out restoration work and servicing is present.
The current owner has had further servicing, maintenance and optimisation work carried out.
Since the restoration, the car has been driven around about 15,000 km and has always been very well maintained.
A recent check-up with a technical inspection was carried out. Service carried out. Today’s light patina fits in very well with the overall appearance of the car, which drives well and fast – and is ready for the road straight away. The vehicle has a German registration.

Price on request.
The sale takes place by § 25 UStG (no VAT statement possible).