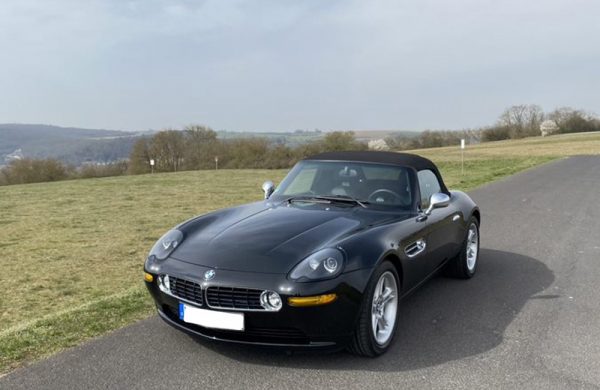 Model history
The BMW Z8 (internal model E52) was manufactured from March 2000 to July 2003.
The design – with its wide BMW kidney and side air intakes – is based on the BMW 507 produced from 1956 to 1959. The prototype, drawn by Henrik Fisker under Adrian van Hooydonk, was presented at the 1997 Motor Show in Tokyo under the designation “BMW Z07”. The production version was presented at the IAA in 1999 and built from March 2000. In the limited series, only 5.703 examples of the vehicle were produced, just 319 of which were in the colour topaz blue.

The structure consists of a self-supporting aluminium frame (space frame) with cladding parts screwed on. The front and rear bumpers as well as the rocker panels are made of elastically deformable polyurethane.
The rear lights were designed innovatively in neon technology (the only vehicle in the world with this technology). The soft top is servo-assisted and a matching hardtop was supplied for the winter. The interior – seats, door panels, part of the dashboard and the centre tunnel – is made out of leather in the colour crema.
The technology is based on the sedan M5 (E39S). The engine is a V8 with 5.0L cubic capacity and 294 KW at 6600 rpm. This allows for superior driving performance. Acceleration in 4.7 seconds from 0 to 100 km/h, top speed is limited at 250 km/h. The power transmission is a 6-speed manual gearbox.

Vehicle history
This vehicle was originally manufactured in the U.S. and was registered in the state of Washington. Two additional keeper registrations followed in California. According to the CARFAX Vehicle History Report available, regular maintenance and services have been performed until 2011.
As of October 2011, the vehicle was listed for sale and later exported to Belgium in the spring of 2012, where the car was first registered on June 18, 2012.
In February 2019, the vehicle was exported to Germany and subsequently converted to meet German registration requirements. The registration of the vehicle took place in May 2019. For this purpose, taillights with yellow turn signals were mounted and the vehicle was recoded into “European” (ECE) standard. The radio was also recoded to EU design and repaired. In 2021, the European rear bumper including new chrome trim was installed.
The hardtop in the colour of the car and roll stands are supplied with the vehicle.

SOLD!
Are you interested in buying or selling a BMW Z8 or a similar car? Please do not hesitate to contact us.