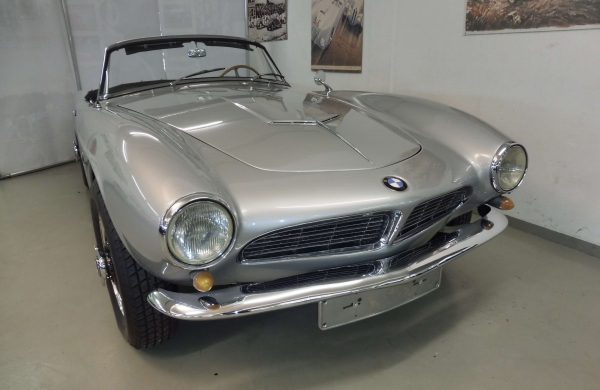 Model history
The BMW 507 is regarded as the dream sports car of the late 1950s and the myth surrounding this model has grown even stronger in recent years. The BMW 507 is a popular collector’s item. The car, which was only built 254 times, was the masterpiece of the designer Graf v. Goertz and the counterpart of the 300 SL built by Mercedes Benz. The BMW 507 was first presented at the IAA in Frankfurt in the late summer of 1955.

BMW’s importer in the USA, Max Hoffmann, played a major role in the decision to develop the vehicle – he saw considerable sales opportunities in the USA. Production ran from autumn 1956 until summer 1959. Prominent buyers of the car included Alain Delon, John Surtees, Ursula Andress, Toni Sailer and Elvis Presley. The car is powered by a 150 hp (110 kW) eight-cylinder V-engine with a 3,168 cm3 cylinder capacity. Both the engine housing and the body are made of aluminium, and the tare weight of the car is 1,330 kg (including 110 litres of petrol). Technically, the BMW 507 is based on the BMW 501/502 limousine – box frame, independent front suspension and rear rigid axle with torsion bar suspension all round.

Vehicle history
The vehicle is one of the very last built in 1957 and one of the few early vehicles of the “new″ 2nd series from that year. Thus, the car has the “right″ year of construction to participate in the legendary Mille Miglia and at the same time has the advantages of the 2nd series, with, among other things, more space in the interior, which particularly tall drivers will appreciate.

This car was officially the only BMW 507 delivered to Lebanon, which was considered the “Switzerland″ of the Middle East at the time. Later, the car made its way back to Germany, and the last previous owner had the car extensively overhauled and restored on his own a few years ago.

Description
The original engine with the engine number matching the car is, as with many others, no longer available and was replaced in the course of the restoration by an identical engine of identical design, but already with 11 reinforced stud bolts. Optionally, an original engine with the ‘40’ number from the 507 series in disassembled condition and in need of overhaul can be obtained for an additional charge. The engine runs reliably and powerfully, just as the whole car it has a good driving impression. The optional Sahara radiator in a large design with improved cooling capacity gives additional safety in higher outside temperatures. The silver exterior paint and the colour scheme of the interior were the request of the last previous owner. Originally, the car was delivered in the colour papyrus white.

The centre lock rims, which were a rare and expensive accessory in the “original″ period, were retrofitted in the course of the restoration using high-quality reproduction parts and they give the car an even sportier character. Furthermore, a disc brake is being installed on the front axle. The optional hardtop is available and can be fitted if desired. An original Zimber wooden steering wheel (the German “Nardi″) is fitted – a very expensive and rare extra at the time.

Extensive service work was carried out on the car last year, invoices are available upon request. > Invoices.

Vehicle price on demand
Sold in accordance with § 25 USt.G (no VAT statement possible) on behalf of the customer.
(All information subject to errors and inaccuracies).