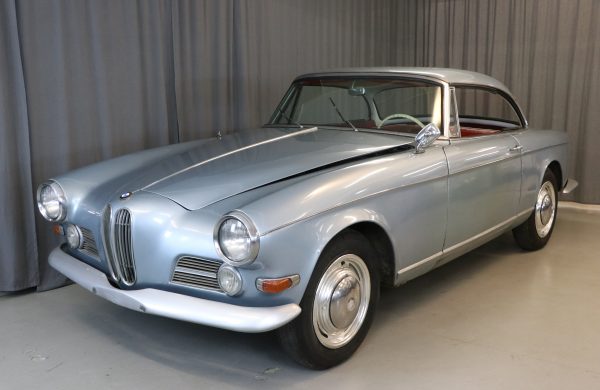 Model history:
The BMW 503 is a two-door coupé or convertible based on the BMW 501/502 luxury-class saloon of the time, featuring a more powerful version of its V8 engine.
The aluminium body, designed by Albrecht Graf von Goertz, was manufactured by the German company Baur and is built on a sturdy tubular steel frame.
Between 1956 and 1960, 412 cars were built in 2 model series, of which 139 were cabriolets and 273 coupés.
The cars were very popular amongst celebrities in industry and film in their day.
For a long time, the 503 was overshadowed by the legendary and sportier Type 507, but its charm is now increasingly appreciated by collectors.


Vehicle history:
This 503 Coupé from the first series was built in May 1957 and delivered to BMW importer Russo & Irmao in Lisbon in the same month.
After several changes of ownership in Portugal, the vehicle was sold to Belgium in 1990 and then to its last previous owner in Düsseldorf in 1994.
The car’s original colour was graphite, and the red leather of the interior corresponds to the recommended variant at the time and is probably still the original from 1957.
The installed engine comes from the later BMW 3200 CS and is the most powerful and improved version with a sensational 160 hp. The engine is running, but the car is currently not road ready.
In many parts complete, this vehicle is a good restoration object.