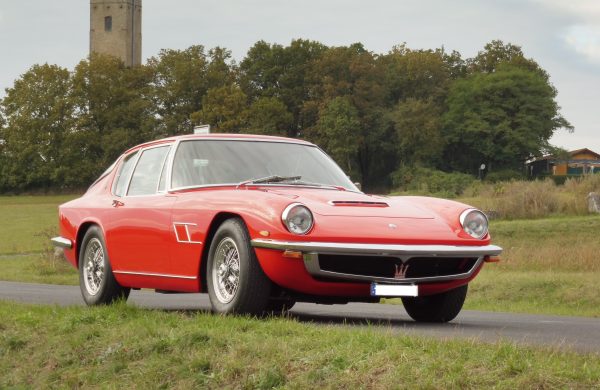 Model history
TThe Mistral is a typical GT of the upper class, produced by the traditional Italian manufacturer Maserati. After its introduction in 1963, a total of 828 Mistral Coupés were built between 1964 and 1970. The design was by Pietro Frua, the body was made of sheets of steel – later of aluminium – and built on a frame of rectangular tubular steel. Doors and bonnets were also made of light metal. The reliable six-cylinder in-line engine with two overhead camshafts served as the power unit. Initially with 3.5 litres cubic capacity, later with 3.7 or 4.0 litres as in this vehicle.
For a long time, the Mistral was overshadowed by its successor, the Ghibli, but in recent years the appreciation of this long-distance sports car has increased considerably.

Vehicle history
# 1668 was first registered in Munich on 07.06.1968. At that time, it was already red. In the following decades, the car changed owners several times. The owner’s history is known, the original registration document – a cardboard letter – is present. In 1974, the vehicle was de-registered as being in the 4th hand and taken out of service until 1986.
After being put back into service, this vehicle changed owners three times. Its last owner has covered approximately 6,000 km since 2014 and has completed several trips and classic car events with this vehicle.
In the past, some restoration work was done – including converting it to more problem-free Weber carburettors and extensively repairing and painting the bodywork. Photo documentation of this work, during which the beige leather interior was also overhauled, is available.The cylinder head was revised in 2015 and the injection system was replaced earlier with Weber carburettors, which were most recently overhauled and adjusted by carburettor specialist Victor Günther VGS. The front and rear shock absorbers are new and the rear brake system is fitted with new discs/linings and brake hoses. The electrical system including the alternator is revised. Tyres and hoses are new, as well as freshly overhauled Borrani wire wheels.

Invoices for maintenance and repair work carried out since the 1980s are present. Since 2014, the vehicle has been serviced by Feierabend GmbH, among others.
An expert opinion from 2014 is available, which grades the vehicle a condition 2. The car is H-registered, and the current mileage is approx. 56,200 km.

Conclusion
The car presented here is a correct Maserati Mistral with a proven history and a lot of original substance, which has a very authentic appearance and is ready for immediate use.
This vehicle is ready to be taken on a long journey and used for its original purpose again.

Price on request.
The sale is on behalf of a customer following § 25 UstG (no VAT statement possible).