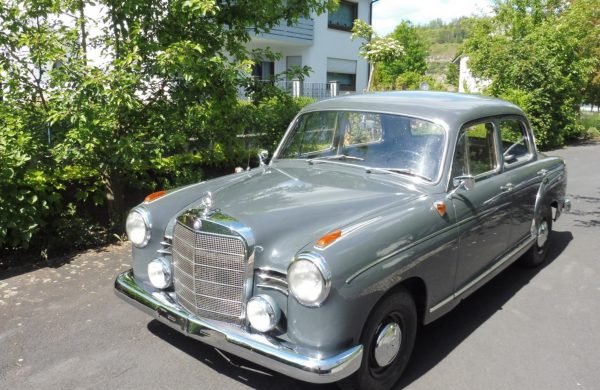 Model history
In 1953, the W120 model series with the Type 180 was introduced to the public, which was the first self-supporting body from Mercedes. It was the successor to the pre-war W136 (170) series. The series was nicknamed Ponton due to the then-new shape reminiscent of a pontoon, which for the first time did not include mudguards and headlights in the bodywork and also no longer featured running boards. Until 1962, the Ponton series was in production in many different versions and shaped the image of Mercedes Benz in the 1950s and early 1960s.

Especially as taxis (diesel), the Pontons were very popular for a long time.

Vehicle History
This vehicle was delivered on 04.05.1961 and first registered on 10.05.1961. Until its decommissioning in July 1978, three owners from the same family were listed in the German vehicle registration document (Pappbrief).
The last owner acquired the vehicle from the son of the first owner in 2005, since then the vehicle has not been driven.
The car is in a mostly original condition with the original engine and a mileage reading of 5,263 km, which probably corresponds to 105,263 km.
The paintwork is largely original and the interior is in its original condition. Chrome parts such as the bumper were partially renewed.

A unique accessory is the original luggage set, which provides optimal use of the spacious luggage compartment.
The vehicle comes with various documents such as a German registration certificate, a customer service booklet, etc.

Within the course of customer service, the brakes were overhauled (new wheel brake cylinders, brake pads, brake hoses, and partially new brake lines), new tyres were fitted, an electric fuel pump was installed, the carburettor was cleaned and the engine was readjusted.